The Story of the Daisy

Daises are nature’s way of smiling; they represent 10% of all the plants in the world.  Gerberas, African daises, Shastas and the largest of all the Sunflower are all part of a large group of the Asteraceae  family.

And, did you know the birth flower for April which of course is our Daisy’s birth month is the Daisy. I wonder if her parents knew that when they named her.

But, the humble daisy has been around for at least 4000 years.

Egyptian ceramics have been found decorated with daises.

Excavations on an ancient palace in Greece turned up Hairpins decorated with daisies.

Roman mythology tells us a nymph named Belodies transported herself into a daisy to escape the attention of the gods.

The Victorians used the Gerbera daisy to symbolise ‘ cheerfulness’ and liked to use it in bouquets, The gerbera was first found in Sth Africa by a Scotsman in 1884 and quickly gained popularity in the UK and now around the world.

It has always been popular in art with many paintings showing fields and meadows of daisies.

The word ‘daisy’ is thought to come from early English ‘days eye’ because they close each evening. Of course one of the reasons the daisy is so durable is because it goes to bed each night. As the sun goes down it wraps it’s petals over its centre and does not show itself until the sun comes up the next morning.

Daisies come in every colour except blue, but you may have seen a blue one in an arrangement, well, sorry to tell you it’s been artificially coloured

It was used in traditional medicine; wild daisy tea was thought to be good for sore throats, open wounds or as a blood purifier. The leaves are edible and can be used in salads.

The daisy’s message is one of hope and renewal and was often found in a new mother’s bouquet in the hope the receiver will see the world again as a child. And, that takes us to our own childhood, daisy chains and garlands, how many hours did we spend threading those gorgeous flowers to see how long we could make it without the chain breaking. Remember girls, when we would take a daisy head and pick the petals off, ’he loves me, he loves me not” about some poor unsuspecting boy!

So, daisies play a large role in our lives and certainly brighten it 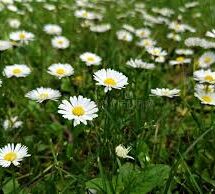 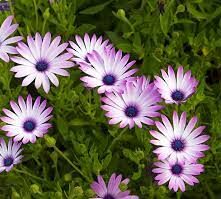 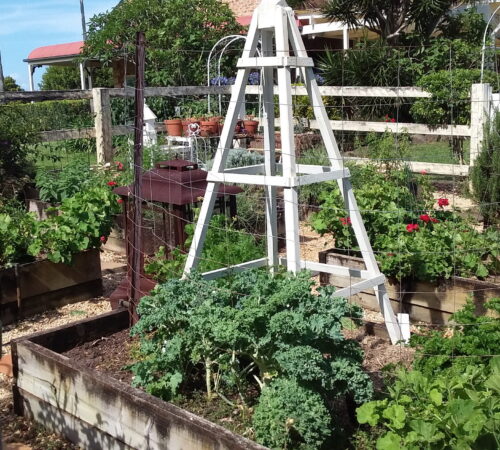