What a year it has been! It started off well enough but, because of Covid, our Garden Club year was severely disrupted. Some meetings had to be cancelled, attendance numbers were restricted so that full Covid compliance could be adhered to, invitations to meetings had to be issued so that numbers could be restricted and attendees had to RSVP their intention to attend. New memberships were also curtailed. The year did not improve but became worse as the year progressed.

The Club did manage to get in a few home garden visits. Our hosts were Steven Wedd, Leonie and Charlie West at Mullumbimby, Mary Hendry at Possum Creek and Joan Neate at Mullumbimby.

In February we learned of the passing of one of our devoted members, John Astill. John was a great member, always happy to do whatever he could to help the Club. He will be sadly missed.

On a brighter and happier note, the Club celebrated the 100th birthday of long-standing member, Daisy Dare. Daisy and her late husband, Alan, joined the Club very early in its formation and held many Committee positions through all of the years. Congratulations, Daisy!

Throughout the year, members were kept updated by our Co-Presidents on what was happening with regard to the ability to hold meetings or home garden visits. Members also kept in touch via the Facebook page where questions and answers could be given to any queries. A handy tool. 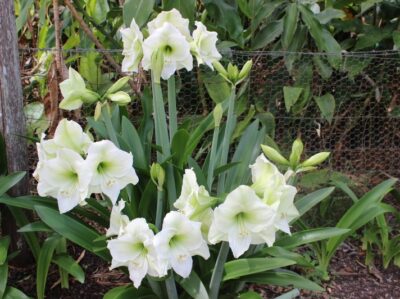