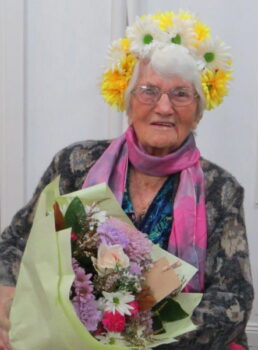 Robyn Armstrong read us a compilation of Daisy’s life

Daisy May Dare (nee Lavercombe) was born on 23 April 1921 in Newrybar, the youngest of five children. Her father was John ‘Jack’ Lavercombe who was a blacksmith, first in Oakey, Qld, and later in Newrybar where Daisy went to school until she was nine. When Daisy was nine, the family moved from Newrybar to a dairy farm in Armstrong Lane, Broken Head. Daisy’s mother was Fairlena May Gill who played the church organ.

In 1938 (aged 17) Daisy passed a dressmaking stage II course which was studied at Byron Bay Technical College. To get there from Broken Head she had to ride a horse. After completing this, she went to work for the Gray family in Skinners Shoot Rd, living there as a housekeeper, nanny, and milking hand. It was here she met Allan Dare who was also working there. She says she wasn’t that impressed with him at first, but this obviously changed and they were married in 1941 when she was 20.

Together, they purchased the dairy farm from Daisy’s parents and continued to work there until they sold it around 1956, and purchased the Hamilton farm across the road on Midgin Flat Road. This became a very successful dairy farm, winning many ‘Country Life’ competitions. There were also pigs which were fed the left-over milk after the cream was sold to Norco. Daisy had a thriving vegetable garden, using manure from the pigs which, together with the slaughter of the occasional pig and a variety of poultry, went some way to feeding the family of four children.

During this time, Daisy did various community work. She taught needlework at Broken Head Primary School where both Allan and herself were members of the P&C. She also played tennis, attended dances and fundraisers at the hall, and generally supported the local area in any way possible.

In the early 70’s, after their last child left home, the farm was sold and they purchased the property where Daisy still lives today. Allan had a debilitating back injury which meant he could no longer work on the farm, but Daisy took it upon herself to earn some money at Walkers’ Meat Works just on the outskirts of town in the Belongil area. She was a real toiler, and was told to slow down by the union bosses as she made the others look bad! It was here that she lost the top of her ring finger when a piece of string caught her hand and pulled it into a machine.

During their retirement, Allan and Daisy both took a keen interest in gardening, joining the Bangalow Garden Club. Allan’s pride and joy was his award-winning vegetable garden, and Daisy’s her orchids and other plants. Even today, Daisy finds it hard to resist buying a plant or orchid that she doesn’t have. She gets a lot of pleasure being able to look out onto her garden and seeing the birds enjoy it too.

Unfortunately, not all her children have endured, with the eldest Val succumbing to Motor Neurone Disease, and the third child and only boy, Bill, killed in a truck accident. Allan died in 2009 at the age of 90. But she soldiers on, keeping up to date with the news and taking a keen interest in sport, especially tennis and rugby. And Daisy still attends the Bangalow Garden Club meetings

Beth Noble regaled us with anecdotes about Daisy’s time with the garden club.

After the speeches Daisy was presented with a beautiful bouquet of flowers as well as delicious and rather beautifully decorated birthday cake baked by Carol Lea.  We all joined together to raise a glass to Daisy and enjoy a piece of birthday cake.

Margaret Bruce wrote this piece about the Daisy flower which she read to us all.

The story of the daisy

Daises are nature’s way of smiling; they represent 10% of all the plants in the world.  Gerberas, African daises, Shastas and the largest of all the Sunflower are all part of a large group of the Asteraceae family.

And, did you know the birth flower for April which of course is our Daisy’s birth month is the Daisy. I wonder if her parents knew that when they named her.

But, the humble daisy has been around for at least 4000 years.

Egyptian ceramics have been found decorated with daises.

Excavations on an ancient palace in Greece turned up Hairpins decorated with daisies.

Roman mythology tells us a nymph named Belodies transported herself into a daisy to escape the attention of the gods.

The Victorians used the Gerbera daisy to symbolise ‘ cheerfulness’ and liked to use it in bouquets, The gerbera was first found in Sth Africa by a Scotsman in 1884 and quickly gained popularity in the UK and now around the world.

It has always been popular in art with many paintings showing fields and meadows of daisies.

The word ‘daisy’ is thought to come from early English ‘days eye’ because they close each evening. Of course one of the reasons the daisy is so durable is because it goes to bed each night. As the sun goes down it wraps it’s petals over its centre and does not show itself until the sun comes up the next morning.

Daisies come in every colour except blue, but you may have seen a blue one in an arrangement, well, sorry to tell you it’s been artificially coloured

It was used in traditional medicine; wild daisy tea was thought to be good for sore throats, open wounds or as a blood purifier. The leaves are edible and can be used in salads.

The daisy’s message is one of hope and renewal and was often found in a new mother’s bouquet in the hope the receiver will see the world again as a child. And, that takes us to our own childhood, daisy chains and garlands, how many hours did we spend threading those gorgeous flowers to see how long we could make it without the chain breaking. Remember girls, when we would take a daisy head and pick the petals off, ’he loves me, he loves me not” about some poor unsuspecting boy!

So, daisies play a large role in our lives and certainly brighten it.