Steven Wedd one of our most knowledgeable members described the many forms of propagation and the why propagate.

Why propagate – inexpensive, insurance against losing a valuable plant, sell excess to raise funds for organisations, gifts and personal satisfaction.

HEEL CUTTINGS – e.g., Gardenia – partly cut the section to be removed and pull in a downwards motion, so you have a heel of bark at the base of the cutting (exposes the cambium layer and encourages new root growth. Trim heel as required and place in mix.

LEAF CUTTINGS – e.g., Begonia – trim stem, trim leaf to 5- 8cm width approx. Push into mix until base of leaf touches mix. Begonia leaves can be cut into sections each with a vein and laid vertically in potting mix.

If in doubt GOOGLE IT – time of year, how deep to place seeds etc.

Seeds don’t like to be wet. Pearlite holds water, Sand is free draining 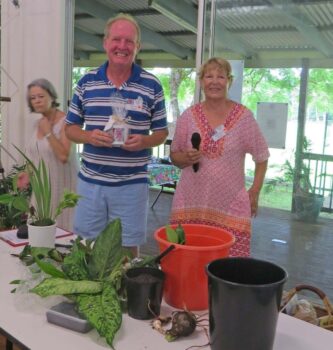